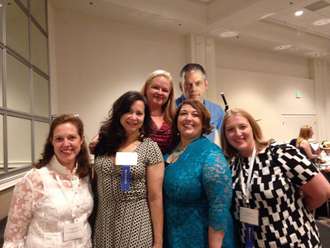 Collaborative Writing: An Irreverent Look Behind The Curtain

As I wrote A YEAR OF RAVENS with my six co-authors Ruth Downie, Stephanie Dray, Eliza Knight, Vicky Alvear Shecter, Simon Turney, and Russell Whitfield, we were often asked about the collaborative process. How exactly does one go about writing a book-in-seven-parts? Well, it involves a lot of emails, a lot of Skype sessions, a lot of back-and-forth Facebook chats–and we undertake it with a great deal of seriousness, as you see from this collection of direct quotes as we moved through the stages of collaboration this year.

As We Outline Our Stories

Simon: I have an eight-page outline, anyone want to have a look?
Kate: My entire outline is eleven words.
Stephanie: I want to talk over-arching themes. What are we trying to say with this book? What’s our overall message?
Vicky: Why are we talking overarching themes before we even know what happens?!
Ruth: My heroine’s name–Ria or Narina? Oh well, I’ll decide by the time I’m done.
Eliza: Really?! I can’t move forward at all until my heroine has a name.
Russell: Hey guys, my story’s already finished!
All of us: (outwardly) Wow, youre so motivated! (Inwardly) Bastard.

As We Research Some More

Stephanie: My Roman procurator’s villa is in Narbo. But I might need to change the color of the grapes in his vineyard. Maybe we can’t be sure of the climate in that specific place for whatever variety of grape existed before modern variations 2000 years ago.
Kate: Don’t mention the color of the grapes. Just say they’re ripe. Nobody cares what color the grapes are.
Stephanie: I’m putting in the color of the grapes! You can’t stop me. I’ve gone rogue.
Kate: Is that the mulish streak of an author thinking “I looked it up. I researched it. It’s going in the book or time is wasted?”
Stephanie: Absolutely! I don’t even drink wine. I don’t know the difference between a Syrah and a Chardonnay. You think I researched grape regions in France for my health? No, Madam. I did not.

Stephanie: The f*cking king still isn’t burned.
Ruth: So many Iron Age names are completely unusable. Corotica, Auumpus, Aessicunia . . .
Russell: My hero can’t keep his willy in his subligares.
Vicky: All right, break for lunch, then back to the slaughter.
Eliza: My muse today is a bitchy bitch who bitches.
Simon: I’ve managed to put two tines of a fork into my hand.
Kate: I love you guys.

Kate: Hey, look at this! `Buzzfeed quiz to find your Celtic name!’ I got `Floraidh, the Gentle Petal.’ Jesus. What are you guys getting?
Simon: `Muireann, born of the sea. For a man who has to travel 50 miles to the ocean, I find that amusing.
Russell: `Aidan the Fiery Rider. The ancient Celts would have seen you as the bringer of light.’ And I’m a complete slacker . . .
Vicky: I got Muireann too. And I live 250 miles from a beach.

As We Finish Our Rough Drafts

Stephanie: Slept for ten hours straight after writing 22,000 words in 4 days.
Eliza: Pulled four all-nighters and is now drinking wine straight from a jar.
Vicky: Cross-eyed from maneuvering her mind around the mental contortions needed to plausibly excuse a massacre.
Ruth: Mightily glad I finished my story when I did, because seconds later a huge spider ran across the desk. I’ll be decamping to the kitchen until it’s died of old age. Or possibly until I have.
Simon: MIA. Apparently fled all the way to Wales to get away from the non-stop barrage of Boudica emails.
Kate: Killed approximately 80,000 fictional Celts and has used every synonym in the book for “slaughter.”
Russell: Smiling like a cat in the cream because he finished his story first and didn’t skate across the deadline over-caffeinated, under-slept, and hooked up via IV to the nearest alcoholic beverage like his co-authors.

As We Edit Each Other

Stephanie: Kate, don’t have your hero kick the severed head. Soooo disrespectful.
Eliza: Two stories to edit AND another book out this week . . .
Vicky: Wait, you guys feel sorry for my story’s homicidal maniac?
Simon: ______ ______ _____! (Editing while on holiday, bumping down a Welsh country road in the passenger seat of a Vauxhall Zafira, going 25 mph behind a horse caravan).
Ruth: Well, my heroine’s unconscious through all of THAT story, so that saves me writing her any dialogue . . .
Kate: Russ, editing your foul-mouthed optio is having a deleterious effect on my vocabulary. I just told my cranky old plug-in coffeemaker to `Hurry up, you dozy f***ing cow.
Russell: You’re welcome, luv.

As We Fact Check

Stephanie: Eliza, stop looking up etymological roots! You can’t FIND a word that’s old enough! That’s the beauty of writing in the ancient world; you don’t have to do this!
Eliza: I. Can’t. Stop.
Ruth: I’ve spent the day only leaving the computer to hunt out books I haven’t used in years. I must go remind Husband that I’m still alive.
Kate: Russ, you say Gaulish, but should we go with Gallic?
Russ: Gaulish. Gallic brings to mind berets, stripy shirts, Gauloise cigs and accordion music.

As We Fact Check Some More

Kate: So, state funeral in the morning and then the pillaging starts . . . you think it could be done by 3pm or so?
Ruth: You know, I’m not sure how long pillaging takes. It’s not something I’ve ever given a great deal of thought to.
Kate: If the funeral is done by morning we have just enough time to kick off the pillaging. If that’s done by mid-afternoon, we can schedule the flogging . . . I sound like a demented event planner trying to rent a hall.

As We Make Continuity Changes

Kate: The blond slave girl mentioned in Story #3 cannot suddenly become a brunette in Story #5; the queen in Story #1 cannot possibly make it all the way north by Story #2 unless we involve a TARDIS; and that Druid cannot die in Story #4 by drowning AND in Story #7 by evisceration.
Stephanie: We need to decide on `Mona’ or `Ynys Mon,’ or the history police will crucify us.
Ruth: Crikey, don’t the history police have anything better to do?
Several voices in unison: No.

As We Work On Promo

As We Celebrate Book�s Launch

Ruth: Really, this was wonderful. It’s been like a crash course in writing combined with group therapy, only funnier.
The rest of us in unison: AWWW . . .

(Then the Yanks wonder: Do the Brits hug?)
(As the Brits wonder: Five hour time difference . . . too early for the Yanks to pour celebratory drinks?)