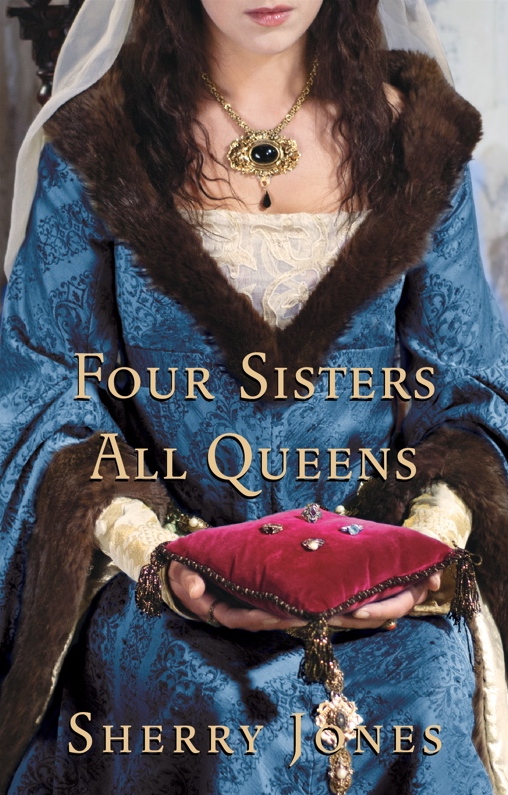 Sherry Jones is perhaps best known for her controversial novels, The Jewel of Medina and The Sword of Medina, international best sellers about the life of A’isha, who married the Muslim prophet Muhammad at age nine and went on to become the most famous and influential woman in Islam. Her new book, Four Sisters, All Queens, a tale of four sisters in 13th century Provence who became queens of France, England, Germany, and Italy, comes out in just a few short days.

I’ve been a fan of Sherry’s since reading A’isha’s story–and not just the story of the Prophet’s extraordinary wife, but the story of how her tale came to be published! (Two words: death threats. So much for my belief that a writer’s life is uneventful.) I was delighted when Sherry agreed to a Q&A here on my blog –my very first author interview! Enjoy her entertaining answers.

1. What drew you to write historical fiction and not, say, chick-lit or young adult or sci-fi?

A’isha, the protagonist of my first two novels, The Jewel of Medina and The Sword of Medina. I’ve always tended toward literary fiction in my reading tastes, but she called to me to write her story. In doing so, I discovered the satisfaction of discovering inspiring women in history and getting to know them deeply, and of bringing them to life on the page. Now I’m hooked!

2. You’ve written two novels about Prophet Muhammad’s wife A’isha, and now you’re on to medieval France and four sisters who all became queens. That’s quite a jump! What drew you to write about such widely disparate time periods?

I had intended The Jewel of Medina and The Sword of Medina to be part of a trilogy. After all the controversy around these books, however, I felt a bit beleaguered — burned out on 7th century Arabia. I’d paid several thousand dollars for an English translation of an Arabic biography that I needed for the third book, but I couldn’t get myself motivated to write. In the meantime, I found Nancy Goldstone’s Four Queens in a Seattle bookstore which specializes in biographies and histories. After reading it, I yearned to know more about Marguerite, Eleonore, Sanchia, and Beatrice of Provence, these 13th century Kardashians, haha! I wanted to know their emotions, their relationships with one another, their lives with their husbands, their ambitions and frustrations. For me, the way to know them was to imagine them — to write a novel about them.

3. Tell us a little about your research process.

I immerse myself as completely as possible in the time and place while I’m researching. I read everything I can find about the era and the people in my books. I take classes, write to historians, visit the locales where my stories take place, when I can. I go to museums, listen to the music of the time, read the literature. I consult primary sources when they’ve been translated into English, cursing my decision not to study Latin in college. I fill myself up with facts until I feel as if I’ll burst if I don’t start writing — and, even then, I continue researching.

4. Do you have a set routine when working on a book?

I roll out of bed and start writing. Once I get into the “dream state” of writing I lose all track of time — but I’m not one of those marathon writers who goes and goes for days on end. My brain gets tired, my writing gets sloppy. So I stop, usually after about 6 hours. I take lots of long walks to process and dream, after which I may write some more.

5. Four Sisters, All Queens has not just one but four very powerful women–and your recent e-release White Heart has yet another powerful queen. If you could be any one of your characters, which would you pick and why?

I already am my characters, and they are me! And yet — if I had to choose one, I’d be Eleonore. She had a husband who respected her — dare I say loved, in a 13th century marriage? — as well as true queenly power, a close relationship with her children, and a knockout wardrobe. She was also, it’s rumored, a writer.

6. You’ve had to face considerable controversy and uproar when you chose to write about Prophet Mohammed’s life. What did you learn in dealing with that? How has your experience differed with Four Sisters, All Queens?

I learned that I’d rather focus on how to live — in love, courage, wisdom, and peace — than live in fear of death. I learned that people believe what they want to believe. I learned that I have all the strength I need within myself. I learned that, contrary to popular belief, bad publicity is not the same as good publicity. The Jewel of Medina and The Sword of Medina are about the youngest wife of the Prophet Muhammad who, according to the Islamic traditions, was 9 when she married him, and he was 52. A history professor read an advance copy and freaked out because, she said, of the book’s sexual content (it is PG-13). She scared Random House into dropping publication of my books 3 months before The Jewel of Medina‘s pub date, and told a Wall Street Journal reporter that I had written softcore porn about Muhammad, Understandably, the Muslim world went nuts, especially radicals in the Middle East and, surprising to me, the UK. My British publisher’s home office was set on fire, causing him to cancel publication, too. I had death threats. It was a very frightening time. Four Sisters, All Queens doesn’t have that kind of controversy attached. Well, I DO portray Saint Louis as a religious nut, which he was, having himself flogged every day, wearing hair shirts, ordering the lips cut off a man for blasphemy. So the French may taunt me. But I’m not afraid.

7. Are you currently reading a book, and if so what?

I’m reading a master’s thesis on Abelard and Heloise and a French biography about them. I’m also reading C.W. Gortner’s The Confessions of Catherine de Medici and The Dovekeepers by Alice Hoffman.

8. Favorite vice that gets you through the stressful times?

9. From ancient Arabia to medieval France–where will your next book take you?

I’m staying in medieval France for a novel under contract with Simon and Schuster about the storied French lovers Abelard and Heloise. It will be the first novel about them since the discovery of letters they wrote to each other during their courtship. It will also, like all my books, be a feminist novel exploring women’s power, or lack of it.

10. What other question if any do you think I should have asked you in this interview, and what would be the answer?

“Every writer, it is said, writes about one thing. What is that one thing for you?”
Women’s power in patriarchal society. Girls mature faster than boys and, judging from patriarchy’s sorry history of war, exploitation, and oppression, we stay that way. When women run the world — and we will — will things be different? You bet!

Thanks so much for stopping by, Sherry! And I cannot wait to read Four Sisters, All Queens–just a few days to go.

Amid the lush valleys and fragrant wildflowers of Provence, Marguerite, Eleonore, Sanchia, and Beatrice have learned to charm, hunt, dance, and debate under the careful tutelage of their ambitious mother–and to abide by the countess’s motto: “Family comes first.”

With Provence under constant attack, their legacy and safety depend upon powerful alliances. Marguerite’s illustrious match with the young King Louis IX makes her Queen of France. Soon Eleonore–independent and daring–is betrothed to Henry III of England. In turn, shy, devout Sanchia and tempestuous Beatrice wed noblemen who will also make them queens.

Yet a crown is no guarantee of protection. Enemies are everywhere, from Marguerite’s duplicitous mother-in-law to vengeful lovers and land-hungry barons. Then there are the dangers that come from within, as loyalty succumbs to bitter sibling rivalry, and sister is pitted against sister for the prize each believes is rightfully hers–Provence itself.

From the treacherous courts of France and England, to the bloody tumult of the Crusades, Sherry Jones traces the extraordinary true story of four fascinating sisters whose passions, conquests, and progeny shaped the course of history.