Alison Morton was kind enough to host me for a Q&A on her blog when LADY OF THE ETERNAL CITY came out – now that Alison’s latest book in her ROMA NOVA series has been released, I’m delighted to welcome her to my blog today!

Even before she pulled on her first set of combats, Alison Morton was fascinated by the idea of women soldiers. Brought up by a feminist mother and an ex-military father, it never occurred to her that women couldn’t serve their country in the armed forces. Everybody in her family had done time in uniform and in theatre–regular and reserve Army, RAF, WRNS, WRAF–all over the globe.

So busy in her day job, Alison joined the Territorial Army in a special communications regiment and left as a captain, having done all sorts of interesting and exciting things no civilian would ever know or see. Or that she can talk about, even now.

But something else fuels her writing. Fascinated by the mosaics at Ampurias (Spain), at their creation by the complex, power and value-driven Roman civilisation started her wondering what a modern Roman society would be like if run by strong women. 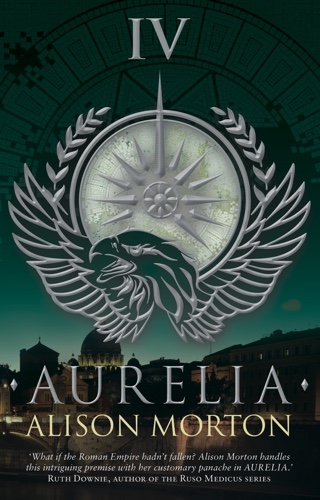 Delighted to have you on my blog, Alison! I know from past conversations that you and I are both huge fans of Robert Harris’s brilliant FATHERLAND (hair-raising thriller that leaps off the premise “What if Hitler won?”) What provided the spark for your “What if” moment, the “What if the Roman Empire survived?” question which drives your ROMA NOVA series?

Thank you for inviting me, Kate! Well, the start of Roma Nova goes back to my own ancient history. Picture an eleven-year-old girl, curly hair, sun hat fallen off her head because she is crouching down on a vast Roman mosaic, and too fascinated by the patterns to pay attention to her mother’s warnings about sunstroke. This was me in Ampurias, north-east Spain. I tipped my head up and asked my father–numismatist and senior Roman nut–who the people were who had made such floors. Who were the children who had played there? Who were the families? He explained about senators and soldiers, traders, merchants, slaves and scribes, how the Romans had come there, what they believed in, how powerful and ingenious they were. When I asked what the ladies and children did, he said they did what the men told them to do. “What would it be like if the women were in charge?” I piped up. He smiled, and said “What do you think it would be like?” And the seed of the idea grew. 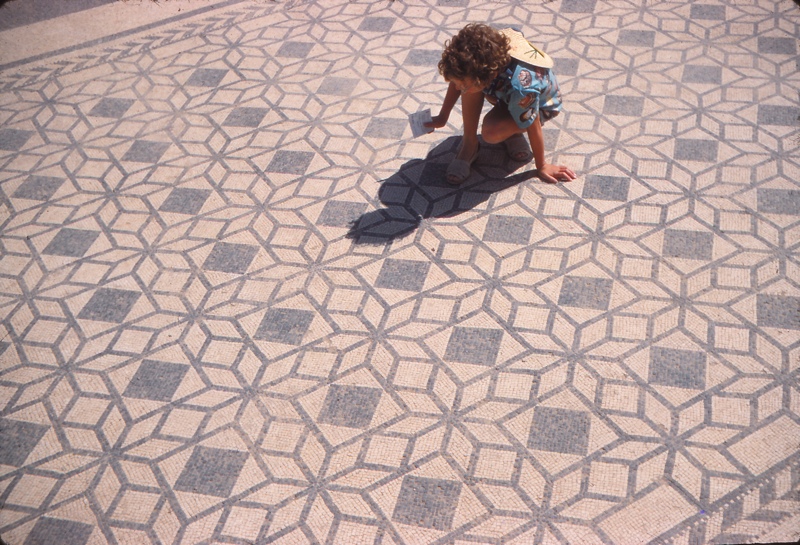 I really enjoyed the cultural details from ancient Rome which made their way into your version of modern Rome: elite military forces that still carry the name Praetorian, the noble patrician families and the honored images of their ancestors, the Latin terminology and the references to the gods. But I’m a history geek who has already read a lot of these details in my own research–how did you go about making these historical touches accessible for a reader less familiar with Rome’s ancient history?

It’s a mixture of familiarity and strangeness. First and foremost, the story must be strong and connect with concerns that everybody can identify with: in AURELIA, it’s mother and daughter relationships; a woman balancing career, duty and love; good guys versus bad guys. These anchor the thread of the story for the reader.

The second is context. Readers don’t want to be hit over the head with a big lump of information, so I feed in detail or explanation via a character’s reaction to something or conversation, more often argument, with somebody. And putting a character in an environment they’re uncomfortable with lets them compare it with what is usual for them–a great opportunity to slip in some detail. As you yourself know, tiny touches of detail here and there can go a lot way!

As an example, on the first page, Aurelia walks by the imagines–statues and busts of ancestors–in the hallway in her house and the reader sees how significant and precious they are:
I left my side-arm in the safe box in the vestibule and walked on past the marble and plaster imagines, the painted statues and busts of dead Mitelae from the gods knew how many hundreds of years. Only the under-steward was allowed to dust them; I’d never been allowed to touch them as a child. 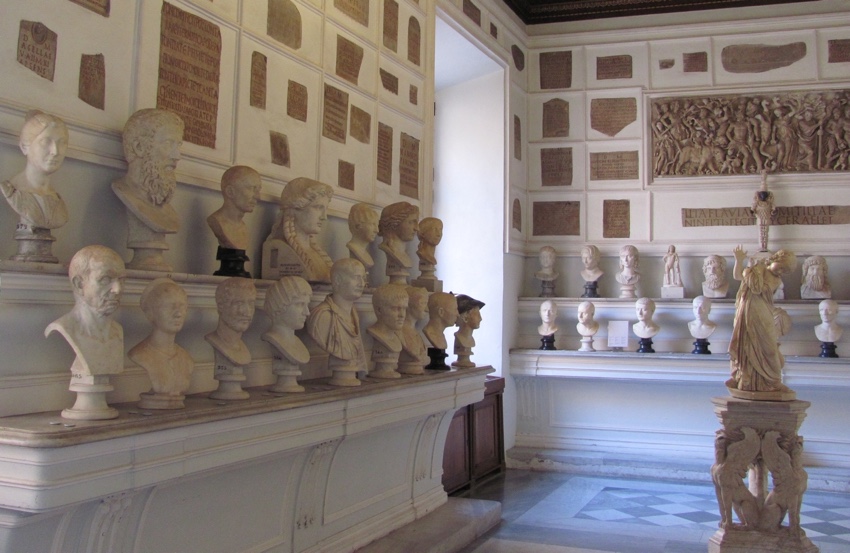 And later, Aurelia is asked to translate an incriminating note from Latin–another chance introduce a little more background about when that kind of note would be written.

And the Latin/German expressions and names? As with any historical fiction, the reader needs to feel the strangeness, to be a little off balance, to experience the unique flavour of the world and time they are entering; dropping in foreign language words is one of the most effective ways of doing this. However, no vital plot point should ever be obscured by these expressions. I’ll confess, I was a professional translator before I started writing novels and love playing with words in this way!

I loved the twist you gave on the role of ancient Roman women as guardians of the family hearth and family honor: allowing that role to expand so that the women of Roma Nova act as family heads and even Empresses in their own right. How did you envision that change overcoming the more traditional role of women in ancient Rome?

Ancient Roman attitudes to women were repressive to our eyes, but towards the later Imperial period women gained much more freedom to act, trade and own property and to run businesses of all types. Divorce was easy and step and adopted families were commonplace. 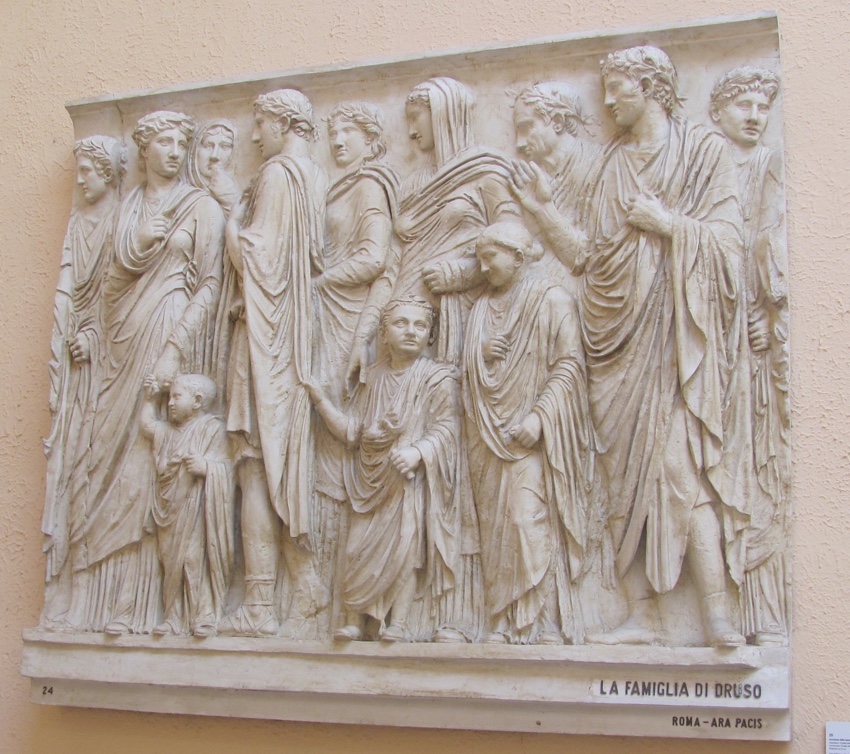 Apulius, the leader of Roma Nova’s founders in AD 395, had met Julia, the tough daughter of a Celtic princeling in Noricum. She left her native Virunum, travelled to Rome, found Apulius and married him the day of her arrival. She came from a society in which, although Romanised for several generations, women made decisions, fought in battles and managed inheritance and property. Their four daughters were amongst the first Roma Novan pioneers so necessarily had to act more decisively than they would have in a traditional urban Roman setting.

Given the unstable, dangerous times in Roma Nova’s first few hundred years, daughters as well as sons had to put on armour and carry weapons to defend their homeland and their way of life. Fighting danger side by side with brothers and fathers reinforced women’s roles. And they never allowed the incursion of monotheistic paternalistic religions. So I don’t think that it’s too far a stretch for women to have developed leadership roles in all parts of Roma Novan life over the next fifteen centuries.

Well, in a way, it was a natural choice. As I was writing the first three books, Aurelia fascinated me more and more. She’s not only Carina’s grandmother but also acts as her “wise councillor”, drawing on a long life of service to the state. What had she done as a young Praetorian officer? And what part had she played in the Great Rebellion twenty-three years before we met her, a seasoned politician and imperial advisor in INCEPTIO? How was she connected with Conrad, Carina’s love interest, whose family was ruined as a consequence of the rebellion? Glimpses of Aurelia’s past life in the first three books were as tantalising for me as well as for readers; several demanded to know her backstory. So did I. As soon as SUCCESSIO, the third book, went to my structural editor, I attacked the keyboard.

Finally, the question you posed to me: do you think historical or alternate fiction does anything to help us understand the past, or is it purely entertainment?

We only have glimpses of what people said or felt in the past based on diaries, accounts and official and unofficial histories written at the time or later and, for the ancient Roman period at least, none of them is complete or unbiased. 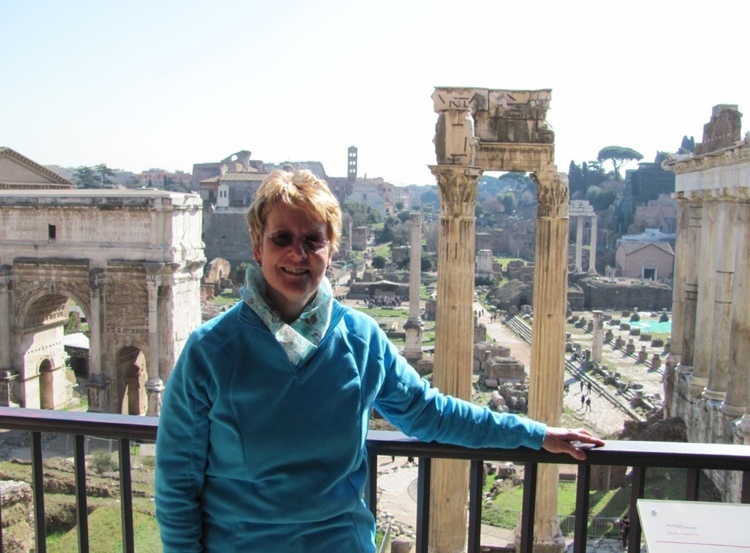 Our ancestors lived in different, sometimes (to us) very strange conditions but I firmly believe they worried, celebrated, loved, laughed and wept in ways we would immediately understand. In alternate history, writers and readers can also explore different possible outcomes to historical events: what if Julius Caesar had taken notice of the warning that assassins wanted to murder him on the Ides of March? Or if Washington hadn’t crossed the Delaware River on Christmas night in 1776? Delicious fun!

If it’s well-researched and intelligently written, historical fiction, including alternate, stretches out a hand to us and guides us into a world that might have been. It fleshes out the gaps that the historical record leaves yawning. I’m a life-long learner–I went back thirty years after my first degree to study for my history masters–but I’ve found that I remember something best if I’ve been entertained at the same time.

So, in a nutshell: what is AURELIA about?

Late 1960s Roma Nova, the last Roman colony that has survived into the 20th century. Aurelia Mitela is alone–her partner gone, her child sickly and her mother dead–and forced to give up her beloved career as a Praetorian officer.

But her country needs her unique skills. Somebody is smuggling silver–Roma Nova’s lifeblood–on an industrial scale. Sent to Berlin to investigate, she encounters the mysterious and attractive Miklas, a known smuggler who knows too much and Caius Tellus, a Roma Novan she has despised and feared since childhood.

Barely escaping a trap set by a gang boss intent on terminating her, she discovers that her old enemy is at the heart of all her troubles and pursues him back home to Roma Nova…

And now, my thoughts!

AURELIA is something of a prequel in the ROMA NOVA series, detailing the adventures of Aurelia Mitela who is grandmother and adviser to the heroine of the earlier novels–but it stands alone with ease, and will be enjoyed by those new to the series and those who have been reading along. Aurelia is as steadfast as a Roman column, brave and capable, newly head of her illustrious patrician clan and struggling with the age-old balance of work, family, children, love, and the demands of her country. Roma Nova is practically a character in itself; the Roman Empire surviving through the centuries to become a tough little city state that values its women as well as its men, and still prizes Roman virtues like gravitas and service to the Imperium. Fans of ancient Rome will delight in the clever historical details woven throughout: elite guards still called Praetorians, the full pantheon of gods still worshipped, the Roman villas that might have come intact from the age of Augustus, but which are now decked out in 60s technology!

A mysterious industrial smuggling scam sends Aurelia on the hunt, only to find that she is the hunted. The pace never lets up as Aurelia tracks an old enemy from Roma Nova to Germany and even further–and what an enemy he is. He reminded me of my own smug golden-boy villain Pedanius Fuscus from LADY OF THE ETERNAL CITY, with the result that I was grinding my teeth in rage as I flipped pages faster and faster to see if he’d get his come-uppance. A racing climax and a fully satisfying ending–recommended for fans of alternate history and fans of ancient Rome!

More about the ROMA NOVA series:

INCEPTIO, the first in the Roma Nova series 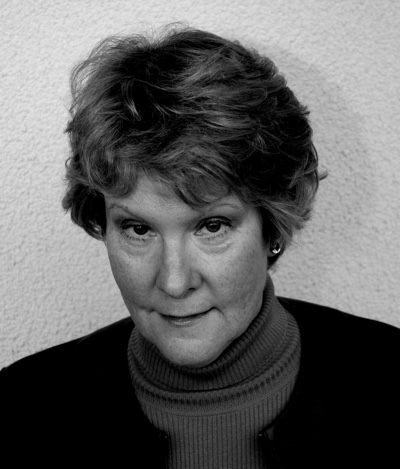