Need Your Travel Fix? Books That Will Take You To Europe

Summer’s here, we’re all still in lock-down, and probably going a little bit stir-crazy. I’m yearning for Europe, but even if I won’t be hopping on an international flight anytime soon, there are books that will take me there! Not a complete list of European countries below, but a fair sampling. If you’re aching for… 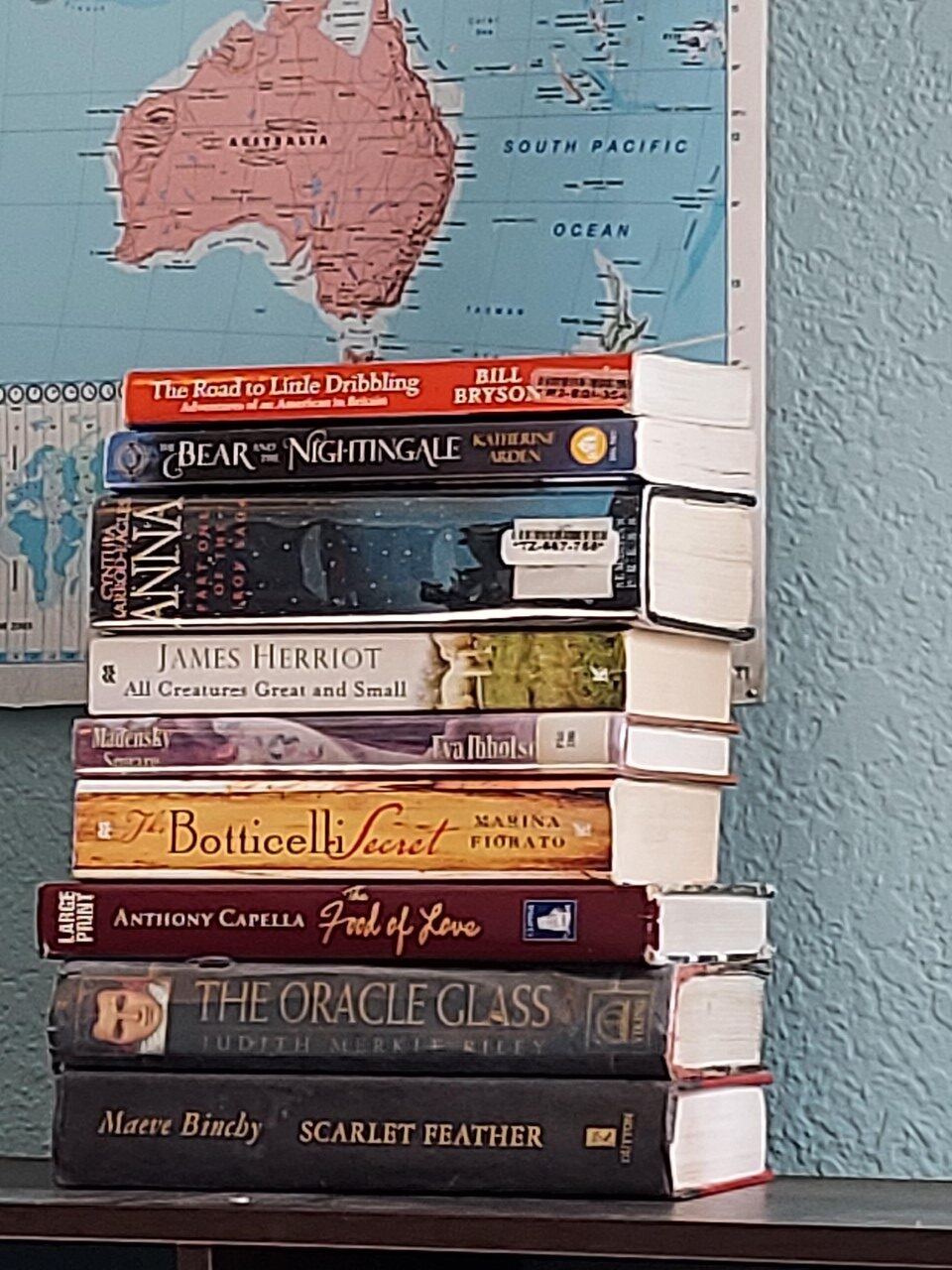 …England? ALL CREATURES GREAT AND SMALL by James Herriot wraps you up in the beauties of Yorkshire through the eyes of a thirties-era small-town vet; BATH TANGLE by Georgette Heyer immerses you in Regency-era Bath along with its two rebellious heroines seeking to control their lives; Winston Graham’s POLDARK series gallops you along the windswept cliffs of Cornwall; Bill Bryson’s THE ROAD TO LITTLE DRIBBLING tootles you in humorous fashion from modern-day Bognor Regis to Cape Wrath and everywhere else between.

…Ireland? Maeve Binchy’s lengthy backlist will take you from modern day Dublin (THE SCARLET FEATHER, as a pair of cooking-school besties try to get a catering company off the ground) to fifties-era small towns (THE GLASS LAKE, as a mother’s abandonment of her family plays out in tense drama through two generations); Patricia Falvey’s THE YELLOW HOUSE and THE LINEN QUEEN immerse you in northern Ireland’s respective struggles for independence and World War II involvement, as seen through the eyes of two fierce young heroines.

…France? THE ORACLE GLASS by Judith Merkle Riley takes you to the Sun King’s Versailles; THE PARIS WINTER by Imogen Robertson immerses you in the belle-epoque Paris of starving artists and Seine-side cafes; MEET ME IN MONACO by Hazel Gaynor & Heather Webb covers not only into Monaco but the sun-drenched Cote d’Azur.

…Italy? ENCHANTED APRIL by Elizabeth von Arnim sweeps you off to Portofino with four disenchanted English heroines looking to rediscover their zest for life; THE FOOD OF LOVE by Anthony Capella retells a modern-day Cyrano de Bergerac love-triangle among the high-cuisine restaurants of Rome (recipes included!); THE BOTTICELLI SECRET by Marina Fiorato embroils a Renaissance-era courtesan and a reluctant monk in a zany caper through the city-states of Italy from Florence to Pisa to Genoa to Venice and more.

…Spain? A SPANISH LOVER by Joanna Trollope follows a buttoned-up Englishwoman who falls for the glories of both Spain and a Spanish suitor; C.W. Gortner’s THE QUEEN’S VOW takes us further back to Renaissance Castile where a young queen dons her armor and her faith to unite her country’s warring factions.

…Austria? MADENSKY SQUARE by Eva Ibbotson is a glorious valentine to pre-WWI Vienna; VOICES OF SUMMER by Diane Pearson sweeps you to a spa town in the mountains where an operetta company puts on the season of a lifetime and all kinds of lives are both hilariously and poignantly at stake.

…Bulgaria? VALLEY OF THRACIANS by Ellis Shuman takes you through modern day Bulgaria in the search for a missing Peace Corps volunteer and a missing ancient artifact; Elizabeth Kostova’s THE SHADOW LAND explores the beauties of Sofia as a World War II-era mystery unfolds from past to present.

…Romania? THE GIRL THEY LEFT BEHIND by Roxanne Veletzos sumptuously and poignantly evokes forties-era Bucharest; DRACULA by Bram Stoker is the Romania-set novel of all time.

…Russia? (Ok, I know Russia isn’t in Europe, but I couldn’t resist one more step east!) Katherine Arden’s THE BEAR AND THE NIGHTINGALE sings an enchanted song of pre-czarist Russia, its myriad spirits, and a brave horse-loving heroine; Cynthia Harrod Eagles’s ANNA evokes glorious Imperial Russia through the eyes of an English governess come to tutor a Russian count’s children as Napoleon sets his sights on invasion; Paullina Simons’s THE BRONZE HORSEMAN brings the siege of Leningrad to life in the midst of a passionate forbidden love story.

Next up: the books that will take us to the myriad countries of Asia, Africa, South America, and more…