Reading In Quarantine: Some Feel-Good Books For You

Everybody needs some feel-good reading while quarantined. Here are some of my favorites…and yes, there are quite a lot of kids’ books on there. This is both for parents looking for books to share with stir-crazy offspring, and adults who simply want some comforting literary nursery food. And most of these come with hefty backlists or are the start of a series, so you should be reading–and smiling–for quite some time. 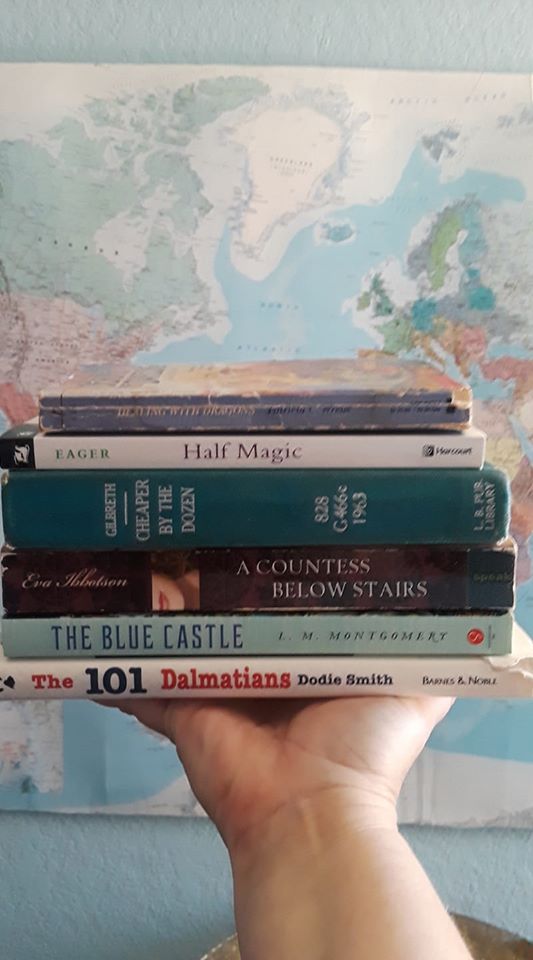 “Dealing With Dragons” by Patricia Wrede. A princess keeping house (cave?) for a dragon…only this princess wasn’t captured, but volunteered for her post after being bored to tears by palace etiquette and thick-skulled princes. The start of an enchanting four-book series, the Dragons books were doing the hilarious-skewed-fairytale thing long before Shrek made it cool.

“Half Magic” by Edward Eager. Four siblings at the start of a long hot summer wonder crossly why they never seem to stumble across magical adventures like the Narnia siblings or the Nesbitt children. Cue the arrival of a magic talisman that grants wishes but only in halves, and let the fractionally-challenged adventures (hilariously) ensue. At least three books follow, all of the kids-go-magically-adventuring sort, all funny.

“Cheaper By The Dozen” by Frank Gilbreth & Earnestine Gilbreth Carey. A breezy turn-of-the-century motion studies expert and his high-powered wife (both real historical figures) have a brood of 12, and the hi-jinks of six brothers and six sisters across WWI and the twenties is funny and touching. The sequel, “Bells On Their Toes”, is even funnier.

“A Countess Below Stairs” by Eva Ibbotson. For anyone who’s already binged “Downton Abbey” and needs a fix, pick up this delightful period piece starring a Russian countess fleeing the Bolsheviks only to find herself scraping a living as a housemaid in a falling-to-bits country manor owned by a PTSD-ravaged young earl newly returned from the trenches of WWI. No sex, lots of humor, and enough upstairs-downstairs shenanigans among the stately-home set to feed your Julian Fellowes craving. And Eva Ibbotson has a huge backlist, all wonderful.

“The Blue Castle” by L.M. Montgomery. You’ve already reread all of Anne of Green Gables–try this standalone by the same author, more poignant and deeply satisfying. A shy, emotionally-battered spinster gets news from her doctor that she has only a year to live, and decides to live it with a vengeance–telling her emotionally abusive family to shove it, getting the first job of her life, then becoming the town scandal when she elopes with a mysterious ex-convict. One of the most satisfying beaten-down-woman-reclaims-her-life stories ever, with a sweet ending. This one doesn’t lead to a series, like Anne’s tales, but L.M. Montgomery’s backlist has lots more besides Anne, and they’re all worth investigating.

“The 101 Dalmatians” by Dodie Smith. Sure, you’ve seen the animated Disney film and the live action remake–but have you ever read the book? Smith’s prose is droll, dry, delightful, very British, and the read will delight you if the story of Pongo, Perdita, Missus, and their kidnapped puppies is one you assume you know.