I’m preparing for this year’s Historical Novel Society Conference, and I’m going as a seasoned veteran, with three previous cons under my belt. Each one was fantastic and memorable in its own right. But as I pack my semi-famous red stilettos for this June, I’ve realized it’s kinda fun to look back at my last three conference recaps. Here’s a highlight reel from year to year: what has changed, what has stayed the same, and what always makes it worthwhile to go!

2011: Since it’s my first time at this rodeo, I spend hours agonizing what to wear. I pack approximately thirty outfits for two days, and nothing seems right. If I wear a suit, everyone is bound to be in jeans. If I wear jeans, I’ll be the rube in a power-suited bunch of professionals. Help!

2013: I’m speaking on panels this time around; cue the nerves. Having spent a week agonizing over my presentations and changing my mind yet again about which scene I would be trotting out for the Saturday Night Sex Scene Read-Aloud, I’m packing literally the last minute before my dawn airport shuttle arrives, flinging things into my suitcase with such random logic that my first thought on unpacking is always something along the lines of “Why did I pack a set of wind-chimes and an abacus, but no pants?”

2015: I’ve been to three conferences by now; why do I not have a nicer set of luggage?! My suitcase is missing a wheel, and my carry-on is a battered black backpack in which I could comfortably pack Dwayne Johnson complete with his helicopter from “San Andreas.”

2011: I take a deep breath and head down for the introductory cocktail hour. I don’t get two feet before Margaret George (!!!) recognizes me. She’s tiny, about up to my chin, and probably wouldn’t outweigh a stack of her own books. We talk shop about Emperor Nero, and I manage not to faint.

2013: I run around shrieking greetings to people I haven’t seen, in some cases, since the 2011 conference in San Diego. I wear my red patent-leather stilettos; the 4-inch ones that turn my toes numb, but give me a Joan-from-“Mad-Men” strut. They’re my good luck charm from the last conference, which I attended as a tongue-tied fan-girl–they were by far the most memorable thing about me. Even more than my name-tag, people at the reception glance at my feet and exclaim, “I remember you!”

2015: My people, there you are! Donna Russo Morin in her spike-heels and Sophia Loren zest for life, Gillian Bagwell and Kris Waldherr, my “Day of Fire” mates Sophie Perinot and Vicky Alvear Shecter, Leslie Carroll and Anne Easter Smith . . . these are my tribe, and it’s delicious to be among them again. C.W. Gortner arrives and the party dials up to an 11.

2011: Keynote speech by power literary agent Jennifer Weltz. Not only does she give a great speech on what exactly an agent does all day and what they’re looking for, she has fabulous black lace stockings.

2013: Anne Perry is our guest speaker, and she’s got the voice of a born story-teller: low, lulling, spooky; absolute mistress of the dramatic pause. She paints such a vivid picture of Robespierre in his tumbril on the way to the guillotine, I can practically smell the blood between the cobblestones of the Place de la Greve.

2015: Diana Gabaldon is guest speaker, and she wisely gives us exactly what we want: ALL the dirt on the new Outlander show, the television process, and of course Sam Heughan.

2011: I catch a morning bagel with Michelle Moran, who has about three feet of glossy dark hair, and would look sensational in one of those narrow Egyptian sheaths her heroines are always wearing. “What are you writing about after Rome?” she asks me. “You don’t want to keep doing the same historical era over and over in your books, do you?” It’s a light-bulb moment.

2013: C.W. Gortner during his lunchtime speech, saying “Historical fiction is often the punching bag of the industry, second only to romances . . . but remember–we celebrate a genre that is time-honored.”

2015: David Blixt during his sword workshop, complete with actual blades: “The groove down the middle of the blade is called a fuller, and it’s there strictly to lighten the blade. DO NOT EVER CALL IT A BLOOD CHANNEL.” We have all been warned.

2011: Four editors, talking about the selling and marketing of historical fiction. One admits she never wants to read another Pride and Prejudice spin-off; another says he’ll howl if he gets another manuscript about Anne Boleyn. I’m right there with him.

2013: “Depicting Religion in Historical Fiction.” Mary Sharratt calls Hildegard von Bingen a power frau, Kamran Pasha skewers fundamentalists of all religions with a pithy “Fundamentalism stems from insecurity,” and Stephanie Dray brings down the house when asked when it is appropriate to critique religion: “Always, but that doesn’t mean it’s wise.” 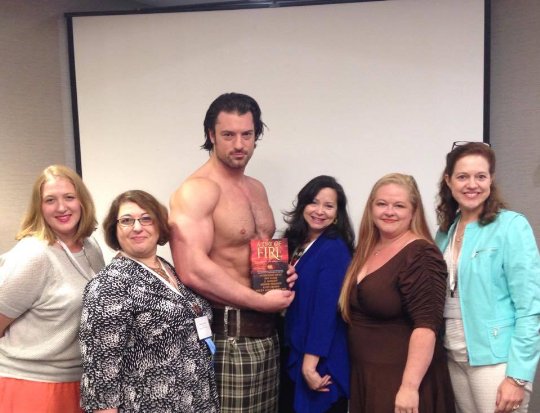 2015: “What Really Happens During A Historical Romance Cover Shoot?” Kim Killion of the Killion Group walks us through it with the help of her amiable 6’8 cover model who has a set of eight-pack abs on which you could grate cheese. We giggle helplessly as Kim explains how the models start fully dressed for the Inspirational/Sweet Romance covers (the female model gets a dictionary shoved in her hand and is told “Here’s a Bible; think of Jesus”) and once the clothes start coming off, the Sexy/Erotica covers get shot. Male cover model strips down cheerfully to a kilt and boots, gets sprayed with Pam (grapeseed oil for the holistic-living models!), and is a very good sport about all the authors laughing hysterically as he smolders on cue.

2011: Diana Gabaldon toting a broadsword through the entire opening cocktail reception. “I promised I’d lend it for the costume show,” she explains, and later observes that any girl looking to pick up guys should just walk into a bar with a massive sword. She’s right: every man at the conference bounces up exclaiming “Oooh, can I touch it?”

2013: The costume pagaent, narrated by Gillian Bagwell/Joan, Lady Rivers. First prize is awarded to a hilarious Teralyn Pilgrim in a pristine Vestal Virgin outfit . . . worn serenely over her eight months pregnant belly. Her Vestal-in-denial routine has us all in stitches.

2015: The horror on the faces of 200+ writers as they walk into breakfast the first morning and see a wall of decaf machines. This is a writers conference; nobody drinks decaf! Decaf coffee is like a hooker that only wants to cuddle.

2011: I anticipated the great panels, the useful discussions, the industry tips. What I didn’t expect was the strange and wonderful zaniness of the people who write, represent, sell, and read the books in this world of historical fiction. As a writer, I work alone–I spend my days in yoga pants, curled up on the couch with a laptop in my lap, engaged in the solitary process of stringing one word after another. What fun to meet so many people who do the same thing; people who all give the same knowing nods when someone exclaims, “Don’t you just HATE it when the girl on your book cover has the top of her head chopped off?”

2013: HNS 2011 was my first conference, and it was an eye-opener: I’d been a professional author for less than two years, and I was going it entirely alone. It was in San Diego two years ago that I first found out what a wonderful community there is of writers, readers, and friends in this business. I don’t think I realized how lonely this job could be, when you don’t have that community. Two years later, and I couldn’t imagine being without it.

2015: The last few years have seen some sobering changes: the demise of brick-and-mortar stores; the Amazon-Hachette feud, and everything else that can have you convinced that writing is a tougher gig than ever. And it is–but what hasn’t changed is the weird and wonderful world of writers, readers, and friends in this business, nowhere more apparent than at the HNS Conference. This is a lonely job; my writer friends save my sanity on a regular basis. And as I unpack my red stilettos and my 16 new books, I already can’t wait for HNS 2017.