Q&A with Stephanie Thornton, Daughter of the Gods! 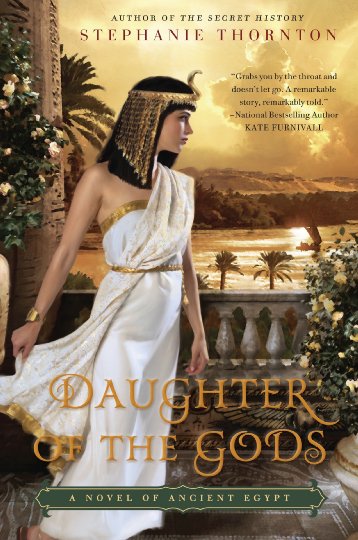 The historical genre can sometimes abound with wafty heroines – moody princesses and soulful courtesans and sighing queens. If you’re tired of reading about these virginal ninnies, then Stephanie Thornton is the author for you, because her historical heroines rock. I loved her Theodora in “The Secret History,” a tough-as-nails girl who rose from street urchin to courtesan to Empress – and I couldn’t wait for Stephanie’s second book on Hatshepsut, the badass of ancient Egypt who took the Pharoah’s double crown for herself.

Stephanie Thornton was nice enough to drop by the blog today to answer some questions! Ok, some one-sentence answers to give some context . . .

My first finished novel was actually “Daughter of the Gods,” but in a strange twist, “The Secret History: A Novel of Empress Theodora” was the first published.

Up now is “Daughter of the Gods,” the story of Pharaoh Hatshepsut and her tumultuous path to Egypt’s throne.

My next book to hit the shelves will be “The Tiger Queens: The Women of Genghis Khan,” followed by a novel about the sister, wives, and assorted lovers of Alexander the Great. (Let’s just say he was a busy guy…)

4. I’m seeing a pattern here. Publishers talk a lot about an author’s “brand,” and a lot of the time it seems like BS – most of us don’t have an over-arching thematic arc for all the books we’re going to write in our lives! But with successive novels on actress/courtesan/empress Theodora, Pharoah Hatshepsut, the wives and daughters of Genghis Khan, and a current work in progress on the women of Alexander the Great, you really do seem to have a clear brand of “Badass Unexplored Women of the Past.” Was that deliberate?

Heck yes! I’m a high school history teacher by day, and I get so tired of the lives of ancient women being summed up as their being barefoot and pregnant in the kitchen. There are a number of mostly ignored, but incredibly badass women in history that should be household names along with Cleopatra and Elizabeth I. (Okay, I realize most households probably don’t spend a lot of time talking about historical women… That might just be my house.)

5. What was your favorite scene to write out of Hatshepsut’s extraordinary life? Most difficult scene?

The battle scene where Hatshepsut is out collecting hands from the dead Nubians is my all-time favorite. I could visualize that scene before I ever wrote the book’s first page. Not only that, but there’s historical evidence that Hatshepsut might have done exactly that in real life, which goes to show that she’s a true badass.

The most difficult scene was definitely the one where Hatshepsut breaks the news to Aset that she’s going to be pharaoh [not Aset’s son]. Depending on who was reading, I was told to make her meaner, have her cry more, or find a really good excuse for why she felt she had to be pharaoh. In the end, there was a good reason for her to seize power, but I also didn’t want her falling all over herself in apology for taking the crown. After all, she deserved it!

6. She sure did! I loved that about her; that she didn’t apologize for being ambitious. Ok, what was the weirdest, whackiest thing you learned in the course of your research?

First, that ancient Egyptian women used a pessary of crocodile dung as a type of birth control. I’m sure it was highly effective at keeping the men away, simply because that’s pretty foul. Second, I am now an expert on stampeding hippos and how best to sacrifice a bull. (Always make sure you have their back legs secured.) Thank the gods for YouTube, because their videos were my go-to for research!

7. Hatshepsut carries her story all on her own, but she’s got a great surrounding cast: her icky-but-sympathetic brother/husband Thut, fellow wife Aset with whom she strikes up a surprising friendship – and of course, charismatic common-born architect Senenmut who alone out of pretty much all of Egypt has the guts to flirt with an all-powerful female Pharoah. Who plays your ideal cast in the multi-million-dollar HBO mini-series? (Because surely Alan Ball and David Benioff are leaving you messages, right?)

So many messages–that’s why I’ve had to hire secretaries! (See Question #9.) I would dearly love to see Hatshepsut played by a dark-haired Emilia Clarke and Senenmut MUST be played by a pre-Voldemort, English Patent-era Ralph Fiennes. *swoon* I’ve always seen Aset as looking like Penelope Cruz and although I’m not sure about Thut, I’m thinking someone like Alfie Allen… someone you could possibly like, but prefer to hate.

8. All your heroines come to dinner–Empress Theodora, Hatshepsut, the wives and daughters of Genghis Khan. How does that evening progress?

First, I hope Theodora’s cooks are in charge of the meal because no one wants to eat food from ancient Mongolia. (Boiled mutton, raw horsemeat, and lots of fermented mare’s milk… Far from a culinary paradise.) I’d daresay there would be some serious gossip on their men’s idiosyncrasies, followed by a rowdy shouting match over who had the greatest obstacles to overcome in order to rule their kingdoms. “I ordered 30,000 people killed after the Nika riots!” v. “I had to marry my brother and then steal the throne from my stepson-nephew!” v. “Dude, my dad is Genghis Khan and he threatened to pour molten silver down my throat if I didn’t clean the ger!”

9. We all know a writer’s life is exactly like you see it on “Castle,” so take us through a typical day for you: the red carpet premieres, the private jet to the 19-city book tour, the weekly lunches with Diana Gabaldon and Philippa Gregory and Hilary Mantel, the publisher-funded research trips where they rent out the Valley of Kings so you can walk in Hatshepsut’s footsteps all by yourself . . .

Actually, I’m writing this in a vintage Chanel suit while on board my private yacht while my army of secretaries sort through the details of my book tour and fend off offers from HBO to turn all my books into mini-series. All in a day’s work…

A girl can dream, right?

Actually, my terribly glamorous day starts at 6AM as I stumble out of bed and head off to teach an assortment of history classes. Then I pick up my daughter, rush home for a flurry of afternoon activities, and throw dinner on the table. Only after my daughter is in bed do I get to change into my yoga pants (the required writer uniform, right?), and sit down to scribble a few pages before falling asleep on my laptop.

However, I did get to travel to Egypt a few years ago in order to research Hatshepsut’s story, although that involved traipsing through her mortuary temple and the Valley of the Kings with all the other throngs of gawking tourists. In August, at mid-day. ‘Cause I’m insane like that.

10. What sets your books apart from other historical fiction out there on the shelf?

My whole goal in writing historical fiction is to bring to light these kick-ass, forgotten women and to tell their stories in a way that makes modern readers appreciate all the nasty, gnarly obstacles they had to overcome. I also revel in all the cringe-worthy details that reveal how brutal life in the ancient world could be. Consider yourself warned.

I drink a lot of wine, study my cats for hours on end, and indulge in marathons of Doctor Who in order to find my inspiration. There’s nothing better than a Syrah-induced haze and the idea of a time-traveling cat to stir the imagination about ancient Byzantium, Egypt, Mongolia, or Greece.

Oh wait… drinking, staring at my cats in a comatose state, and mega-Doctor Who marathons are what I do after my writing deadlines…

Stephanie Thornton is a writer and history teacher who has been obsessed with infamous women from ancient history since she was twelve. She lives with her husband and daughter in Alaska, where she is at work on her next novel. Visit her website at www.stephanie-thornton.com.