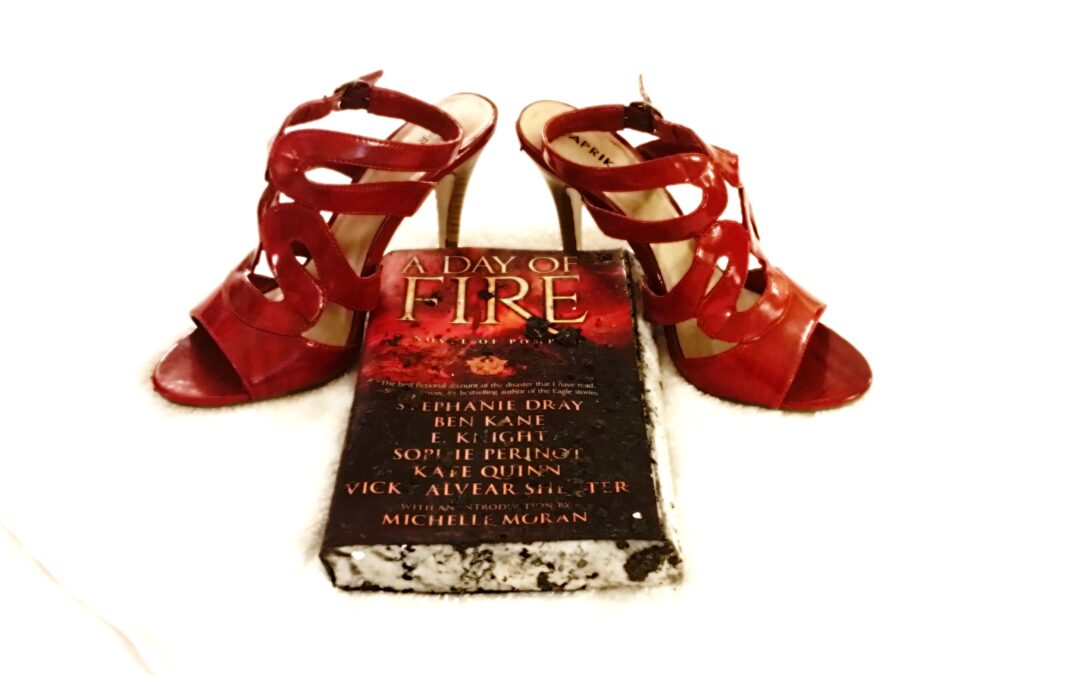 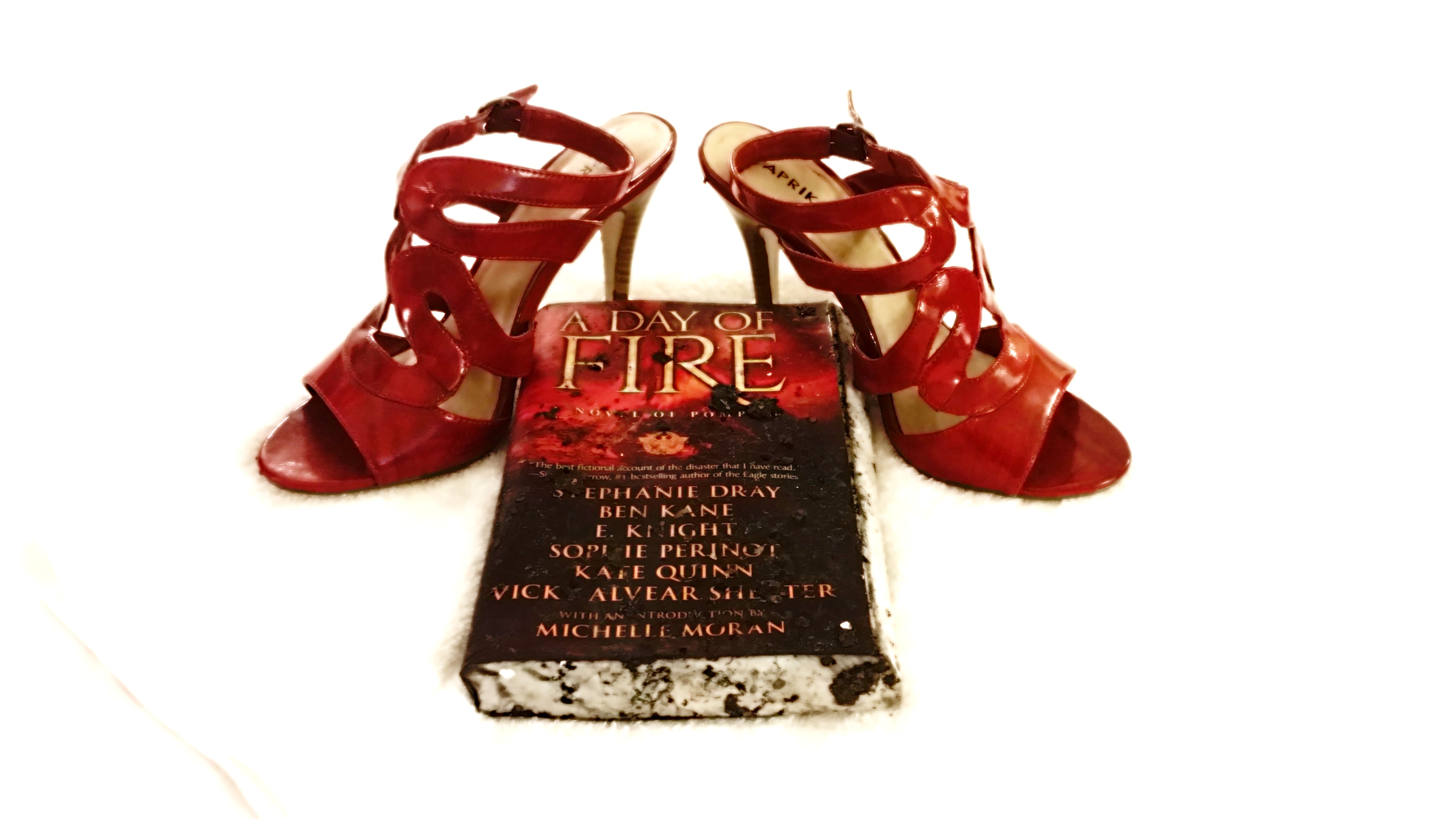 I’ve been asked “How did it happen?” so many times I could tell the story in my sleep, but I’ll tell it again on the page. I think for a writer, it isn’t real until we’ve written it down.

The Overseas Gladiator was home from the Middle East, having been given ten days to fly home for his grandmother’s funeral. The day after the funeral we made the long drive home, lit a big fire in our fireplace as we’d done a thousand times before, poured a glass of wine each, and settled down to relax for the rest of a cold Wednesday night. Twenty minutes later, we were homeless.

As we sat in the firelight reading, the fire quietly ate its way out of the back of the fireplace and spread through the wall of the house. By the time a neighbor pounded on our door to let us know the back of the house was kindling, the fire had already raced up inside the wall to the attic and was sweeping through. The Overseas Gladiator tried to hose down the back wall as I raced upstairs to get the Praetorian Dog who had been locked in the bedroom since the commotion started. That was when an enormous boom of a backdraft ripped through the house, a rush of super-heated air and ash billowing down from the burning attic. The blast knocked the Overseas Gladiator back against the deck railing, and flung me down the stairs like a rag doll. Shortly after we were standing barefoot in the icy parking lot, clutching the dog and watching as three separate fire trucks arrived with sirens blaring, and fire started licking its way over our roof.

Someone noticed at some point that my arm and shoulder and cheek were toasted medium rare–I wasn’t feeling a thing–and then the night turned into a round of emergency rooms, hospital beds, paperwork, and the slow shocky process of realizing we were still alive. I was only in the hospital for one night (the burns weren’t as bad as they looked) but it was a long, strange night full of glass-sharp individual recollections.

I remember the blast that kicked me down the stairs, half tumbling and half scrambling to get under the wave of fire and ash that was falling all around me like a halo. My hair was crisped all across the top; lying in the hospital bed later, I ran my hand across my ashy knotted bun and realized that if I hadn’t clipped my hair up that night, my two-foot banner of hair probably would have gone up like a torch.

I remember seeing the OG in full-on hero mode, shoving me toward safety as he charged upstairs into a wall of smoke to save the dog–and later collapsing in the hospital corridor when he realized I was ok.

I remember unloading every curse I knew in the ambulance once the pain from my burned arm finally kicked in. I know a lot of curses. The EMTs were apparently impressed.

I remember laughing like drunken hyenas on our respective gurneys as the OG said into the silence, “Well, on the bright side, I’m not flying back to the Persian Gulf in two days.”

I remember lifting my charred eyebrows and saying “Seriously?” when an earnest young ER doc asked me “So, are you in any pain?”

Most of all, I remember the astonishment of seeing just how many people rushed to help us friends, family, complete strangers.

One week later, and things are a lot better. We’re in an apartment that is starting to feel like home, and our burned-out house is scheduled to be renovated over the next six months. My burns are healing up, the pain slowly fading toward a hell of an itch. The Overseas Gladiator keeps me smiling with a never-ending string of incredibly crass jokes about barbecues, bonfires, and our very own Ash Wednesday. Insurance is paying to replace what we’ve lost, and we’ve been able to save a surprising amount the bust of Clio (muse of history) on my desk; a laptop and all my writings; my red conference stilettos.

The astonishment is still there, however, when I think how many people have stepped forward to help us. Our families, swooping in with advice and money and offers to dog-sit. Our friends, coming by with armloads of towels and supplies and home-cooked meals. The Navy, bending over backward to keep my Overseas Gladiator from having to go back overseas until this is handled. Complete strangers donating to a GoFundMe page with good wishes and prayers.

I look around me and I feel nothing but grateful. I lost a house, but I have so much: a husband, a dog, and the best family, friends, and fans in the world.

**From the Overseas Gladiator**
I asked Kate, the estimable 5’2 Toasty Badass, if I could write something to tack onto her blog post about our recent house fire.

When I asked, and she said yes, I had this vision in my head of writing some moving piece about the preciousness of life, about how everything has unappreciated value, about how the fire happened, about how you realize what you really need in life, all the typical platitudes from your average run-of-the-mill romance novel. Which tends to get turned into a cheesy movie. Starring, I dunno, Ryan Gosling.

But all I keep returning to is…… Ash. Smoke. Fire. Fear. Chaos. Grief.

Hearing the pounding on our front door by our neighbor, who saved our lives.

Hearing the terrifying, You’re on FIRE! YOU’RE ON FIRE!! and feeling everything just simply stop as the words hit like cold, methodical punches to the brain.

Seeing flames licking out from the side of our house.

Feeling like we were drowning in liquid panic as we just couldn’t move fast enough to get the hose hooked up.

That feeling of absolute, blind futility, of the purest form of utter helplessness, as I watched the flames just climb up the side of our goddamn house despite pouring water on it as fast as I could.

Hearing the backdraft explosion happen, blinking stars out of my eyes as I briefly wondered what the fuck just happened, and why am I on my back?

Hearing a series of thumps that only later I realize was my wife falling down the stairs.

Hearing her scream that the dog is trapped upstairs, and knowing that death is literally seconds away from everyone in what used to be our refuge, our sanctuary, our world, as we felt the flames spread.

Shoving Kate and our neighbor toward the front door, screaming, Out, out, out!! Everyone get the fuck out, NOW!!

So…..hopefully I don’t have to stress the sanctity of life, of how everyone should appreciate what and more importantly who they have in their lives. Just find your significant other, give them a hug and a kiss. Call your parents, hug your kids, what the hell ever you think would work.

Because I damn near lost the most important person in my world. And believe me when I say that it re-calibrates your perspective.

And finally, thanks for all the love and support, everyone. It’s been simply….astonishing and wonderful to know that so many amazing people are willing to help.

From the depths of this salty Sailor’s heart, from both of our hearts; thank you. With everything we have.