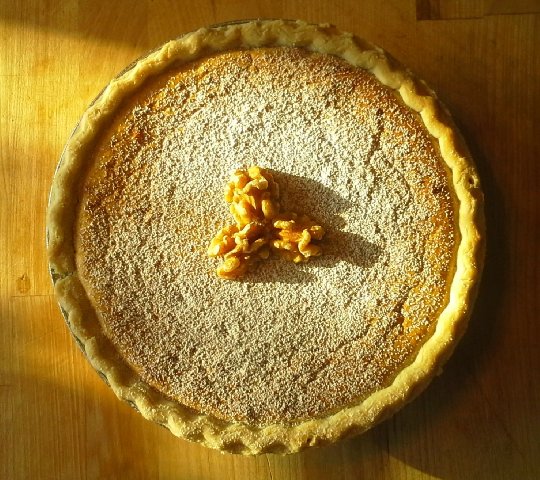 I’m a foodie at heart–you can always count on there being delicious food in my books. (And the best part about fictional food? Zero calories!) My Borgia duology “The Serpent and the Pearl” and “The Lion and the Rose” has the most mouth-watering food out of anything I’ve written, because one of my heroines is a chef: Carmelina, a tart-tongued girl with near-magical skill in the kitchen, who has the job as maestra di cucina for the Borgia Pope’s mistress.

Serving under her is teenage apprentice Bartolomeo Scappi, a historical figure who will grow up and become one of the greatest cooks of the Renaissance–his cookbook is still in print today! Now, it’s a curious thing that most of the world’s mega-chefs tend to be men, but ask any of them how they learned to cook, and it’s always a female name that comes out. (Most usually “Mom” or “Grandma.”) So when I leafed through Bartolomeo Scappi’s cookbook, I asked myself “Who taught him all this?” And the answer presented itself: “I’ll bet it was a woman.”

Fortunately we know very little about Bartolomeo’s beginnings, when he was born, or where he trained, so I was free to invent Carmelina as the girl who teaches the greatest culinary genius of the Renaissance everything he knows. When these two get together in a kitchen, sparks fly, knives are sometimes hurled, and magic happens–along with a lot of great food!

When “The Serpent and the Pearl” was released, I put together a virtual pot-luck with six fabulous food bloggers who combed the book for recipes and trooped off to their kitchens. The results were mouth-watering, and I know we had to host a re-match for “The Lion and the Rose.” Today I’m joined by Theresa from Outlander Kitchen and Island Vittles, who cooks from Diana Gabaldon’s fabulous Scottish saga; Chelsea from Inn At The Crossroads, who recently co-authored a fabulous cookbook based on “Game of Thrones” recipes; Christiane from Taking On Magazines, who cooks her way through the likes of “Better Homes and Gardens” and “Bon Appetit” utterly undaunted; Lori from Little White Apron who is a pro chef as well as a blogger extraordinaire; Deana from Lost Past Remembered who recreates food from myriad centuries gone by; and Heather Webb from Between The Sheets who took time off from her
recent smash-hit novel on Empress Josephine to indulge her foodie hobby.

Inn At The Crossroads: the Roman-style tenderloin Bartolomeo makes when Carmelina’s stuck in a convent with the Pope’s daughter Lucrezia.

Island Vittles: the candied nuts which all the Borgias are constantly snacking on as they plot. And as a bonus? The fried tubers from the New World, which feature heavily in a scene my readers have taken to calling simply �the aphrodisiac potato scene.�

Little White Apron: the salad of blood orange, fennel, and olives served to the Duke of Gandia, and the beef en brochette served at a very illicit Vatican party.

Lost Past Remembered: the fish pie flavored with oranges, nutmeg and dates which Bartolomeo whips up after changing Carmelina’s menu behind her back (and boy, does he get in trouble for that!)

Taking On Magazines did TWO posts! The venison in cream and brandy sauce served after Juan Borgia’s latest hunt, and the tortellini with basil and parsley filling with which Bartolomeo hopes to woo Carmelina.

Between The Sheets: the endives stuffed with cheese and drizzled in olive oil which are served at the Menagerie Masquerade Ball, and the pastries layered with honey and blood oranges on which Lucrezia nibbles while waiting for a divorce.

As for me, I rolled up my sleeves and tackled a recipe from Chapter 17 of “The Lion and the Rose:” a walnut and pecorino cheese tourte Carmelina muses on to keep herself sane during a dull period stuck in a convent.

“Three eggs, whisked together with a mixture three parts sugar to two parts strawberry honey,” I recited aloud as I swept the convent courtyard. “Add two cheeses, a soft sheep’s milk cheese and a very fresh pecorino cheese from Pienza, and then a double handful finely chopped walnuts . . .” The lay sisters were supposed to recite their prayers as they went about their work–a rosary, or perhaps an Act of Contrition if they were feeling guilty about anything. I recited recipes.

This is a recipe I got from a little volume of Vatican recipes through the ages, and supposedly dates from the days of Pope Pius II. Given that a handful of walnuts and a hunk of cheese are just about my favorite snack of all time, I was intrigued by the idea of putting them together in a pie, and dying to tackle this for the virtual potluck! I made a few modifications to the ingredients–Wegman’s does not carry strawberry honey–but the result is still delicious: a sort of early-Renaissance version of a classic cheesecake. The texture is identical, and the flavor mild and nutty, the saltiness of the pecorino melting into the honey and sugar. If you would like a bolder flavor, dust the top of your tourte with cinnamon instead of powdered sugar. The perfect holiday dessert for that one family member who isn’t big on sweets.

2. Make your pie-crust if you are making from scratch (use a pre-made shell if you’re low on time). Either way, pop the crust into the oven at 325 degrees and do a pre-bake for a few minutes, so you don’t end up with a soggy bottom crust once filling is added.

3. Whisk together the eggs, sugar, and honey in a large bowl.

4. Gradually add the pecorino cheese, ricotta, flour, and chopped walnuts, and blend together. When egg whites have been whisked stiff, add bit by bit to the walnut and cheese mixture, and blend.

5. Give mixture one final stir (the nuts will want to sink to the bottom) and then pour into pie shell. There will be enough for two pies.

6. Bake 55 minutes at 325 degrees, checking frequently toward the end. You want a nice golden top, not a burned blistered pie.

Be sure to check in on the others for some more great recipes! And as for the food bloggers who kicked in on this project – Theresa, Lori, Heather, Christiane, Chelsea, and Deana – thank you all so much!